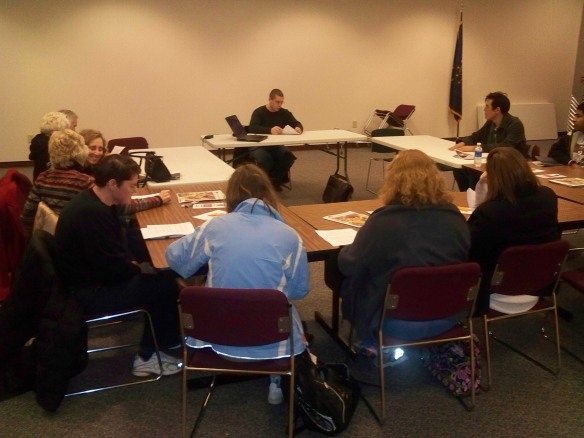 Thanks to the Sycamore Review’s Looseleaf Workshop Program, on Monday, February 8th, at the Tippecanoe County Public Library in Lafayette, IN, I hosted a workshop on the love poem, just in time for Valentine’s Day. Here’s the description I provided for the advertisement:

The Love Poem in the Information Age

In the age of e-mail, text-messaging, Facebook and Twitter, technologies which threaten to make all communication the mouthpieces of superficial, public representation of ourselves, how do we write a highly personal poetry that speaks to the deepest  and most vulnerable of emotions? And in a time when the fear of identity theft runs high, how can we manage to freely and openly give ourselves away to someone in verse? This workshop will focus on constructing a voice and presence on the page that is written both to a public and deeply private audience, and expresses an authentic love while avoiding superficiality and sentimentality.

The workshop went great. Sixteen or so participants (and a few observers) showed up, and almost everyone seemed to get something meaningful out of the exercise portion of the workshop. Obviously, though, an hour and a half was hardly enough time to teach much about the “craft” of poetry to what turned out to be a group largely unfamiliar with poetry and inexperienced in writing it. A group such as this is hardly ready for a lecture on postmodern issues of authorship and poetics. It was really refreshing to see what newcomers to the act of writing poetry came up with in this short time. This is the first of my community workshops that has been so well attended, and it felt great to interact with people really interested in writing. I feel that many of the participants left with something more than they came with, which was ultimately the point of the workshop. I hope to do something similar again, for sure.

My Concerns About Expression and Love Poetry

I was thus surprised by how much I relied on the somewhat distasteful and largely unfashionable jargon of “expressing yourself” through poetry. I’ve been reading Silliman’s Age of Huts lately, and a stanza (or item? notebook entry?) in The Chinese Notebook seems to express the cause of my unease on this issue:

137. The concept that the poem “expresses” the poet, vocally or otherwise, is at one with the whole body of thought identified as Capitalist Imperialism. (166)

In this case, though, I had expressly chosen to focus on a particular kind of love poem, one whose intention, speaker and audience are all well-defined and make problematic a wholesale rejection of the poem “expressing” the poet. The kind of poem I was teaching was conceived as a gift from the poet to a specific person: wife/husband, lover, crush, etc. The two poems that best demonstrated the type of love poem I was aiming for (out of the six or so that we examined as positive examples) were Kenneth Koch’s “Alive for an Instant” and Appolonaire’s “The Ninth Secret Poem,” mostly because they fit the description of the poetic act I was hoping for in the workshop:

Without irony, without superficiality, we will seek to express something beautiful that comes out of love and is to be given to another as an act of love.

It is the idea of “poetic act” that is concerning me most here. Having a clear understanding of what kind of act (and there are many) one wishes to make through poetry is what defines the relationship between the poet, the text, and the reader, as well as being the basis for any judgement of the relative worth of the text.

In the case of a “private love poem,” as I have called the type of poem I wanted written in the workshop, the conception of the poetic act involves an act of sharing and communication between two parties that know something (or nearly everything) about each other, something which is generally not true most of the time for a poet. As a gift, it is an act of giving to the beloved. In the case of Koch and Apollonaire, the poet is giving their playfulness and their feelings of exhilaration in love to the beloved. In the case of Robert Creeley’s “For Love” or “The Act of Love,” one might say it is the depth of his thought that is his gift. With Gary Sullivan’s poem/e-mail from Swoon, [“Dear Nada, Brilliant wind conflicts the absorb I set sail against“], it is all of the above set in a passionate rant more clearly in the tradition of the love letter than many of the other love poems we looked at.

After putting all of this together and spending time with the 15 or so people in this workshop, I’ve learned a lot more about my own ideas about “expressing myself” in poetry. Mainly, I feel that I could again write out of a clearly articulated subjectivity, or “as myself,” if I felt that it would forward the intention of the poetic act. This comes with the awareness that any expression of myself is inevitably deceptive, as it is founded upon my own sense of self and my “voice” which are, in the end, only performances founded on my desires, concerns, and general ignorance about life. Most of the time, using cut-up, metonymy, or visual strategies, my poetry avoids the issues of the author “expressing” himself in a poem. My tastes, my sense of humor, and other aspects of my personality are undoubtedly manifest in my work whether or not I write as a character speaking in the text. In a poem written as an act (and gift) of love, I think I could write from a more “traditional” subjectivity again, as the representation of my personality, my desire and lust, spoken in my “normal” or “everyday” voice, is one good way to make such a gift.