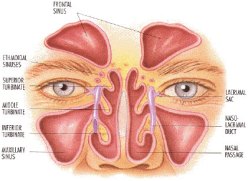 I’m down with another sinus infection (I believe that is 4 since last October now). On more meds and awaiting the results of a CT scan. So I’m pretty well stuck in the apartment, drinking lots of water, and reading/watching Ren & Stimpy DVDs.

[UPDATE: In August of 2007, it became clear that I had not been having this many sinus infections, but that my migraines had increased dramatically in frequency and had migrated down into my face from the top of my head. Migraine medicines complicated things for a while. Now (in March 2008) I’m off of caffeine (good!) and working in other ways to reduce stress and have fewer headaches.]

[UPDATE 2 (July 2008): For anybody else with migraine trouble reading this post, I wanted to write that cutting caffeine has continued to be good for me, and that a daily dose of 385-400 mg of Feverfew (an herbal supplement you can find at most stores that carry such things) has also helped to greatly reduce my migraines.  I’ve been taking it daily for three months now, and I have only had 3 migraines and a few minor headaches.  I would recommend anyone suffering from migraines to try it.  Keep in mind that you need to take it daily for two weeks before it takes effect, so be patient.]

After recommending the book What the Buddha Taught to Brian, I decided to borrow it from my brother again and re-read it. What a great book. Sadly, I hardly ever read any of the historic Buddha’s own teachings: I’m usually reading Tibetan texts and commentaries. The stories of his teachings to wanderers and laymen that are contained (in full) in the back of the book are a great bonus for Rahula’s own excellent expositions. Most Buddhist books in English seem very dated after 30 years or so, but this one is over fifty years old, and all of the language still seems well-chosen, direct and clear to follow.

I’ve also been reading some Frank O’Hara, a poet I had pretty much ignored up until now. I’m reading “Second Avenue” right now. Amazing!

My Life and The Homewood Books are still slowly getting finished. I’ll probably only finish Damballah by the time school begins, though.