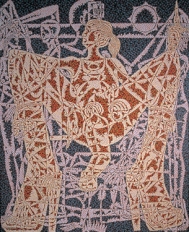 I’ve moved on from Wonder Boys. The first 80 pages have been enjoyable, but I’ve lost interest. I see another Michael Chabon novel in my future though, probably The Mysteries of Pittsburgh, as I have not seen the movie adaptation that was never made of it six or seven times.

So, I’ve picked up John Edgar Wideman’s Homewood Books (Damballah, Hiding Place and Sent for You Yesterday) and read the title story out of the collection Damballah. That’s the only story of his that I’ve read before (in the only fiction workshop I’ve ever taken). If you’re an avid reader of the blog, you may remember my mention of the book in an earlier post. Wideman’s photograph is attached there too.

To get a sense of what this trilogy is, I’m going to include a few paragraph out of Wideman’s preface to the University of Pittsburgh hardcover edition of the trilogy (incidentally published years after it was published in several soft cover editions):

The three books offer a continuous investigation, from many angles, not so much of a physical location, Homewood, the actual African-American community in Pittsburgh where I was raised, but of a culture, a way of seeing and being seen. Homewood is an idea, a reflection of how its inhabitants act and think. The books, if successful, should mirror the characters’ inner lives, their sense of themselves as spiritual beings in a world where boundaries are not defined by racial stereotypes or socioeconomic statistics.

The value of black life in America is judged, as life generally in this country is judged, by external, material signs of success. Urban ghettoes are dangerous, broken-down, economically marginal pockets of real estate infected with drugs, poverty, violence, crime, and since black life is seen as rooted in the ghetto, black people are identified with the ugliness, danger, and deterioration surrounding them. This logic is simple-minded and devastating, its hold on the American imagination as old as slavery; in fact, it recycles the classic justification for slavery, blaming the cause and consequences of oppression on the oppressed. Instead of launching a preemptive strike at the flawed assumptions that perpetuate racist thinking, blacks and whites are doomed to battle endlessly with the symptoms of racism.

In these three books again bound as one I have set myself to the task of making concrete those invisible planes of existence that bear witness to the fact that black life, for all its material impoverishment, continues to thrive, to generate alternative styles, redemptive strategies, people who hope and cope. But more than attempting to prove a “humanity,” which should be self-evident anyway to those not blinded by racism, my goal is to celebrate and affirm. Where did I come from? Who am I? Where am I going? These unanswerable questions — the mysteries of identity and fate they address — are what I wish to investigate.

I’m looking forward to reading this book more than anything I’ve come across in a long while. And of all the books I’ve purchased in the last few years, this one may get read sooner than any.

3 thoughts on “Moving on”